Michigan is an amazing place and one of the nation’s top tourist destinations. From the shores of mighty Lake Superior in the Upper Peninsula to the Motor City, there’s an almost overwhelming number of things to do, experience, see and share. So the next time your group wants to hit the road, check out what these Pure Michigan cities have to offer. See below for some of our featured destination locations you can visit with Indian Trails, just to name a few.

Lansing, Michigan’s capital city, is a great place for your group to visit for a day, a weekend, or longer because there is so much going on all year round. You can also find lots to do in Lansing’s neighbor city, East Lansing, home to Michigan State University.

To say Detroit is experiencing a renaissance is a huge understatement. In fact, the city becomes more amazing every day as old and new businesses, restaurants, artists and entrepreneurs move “downtown.” If your group wants diverse options, take a trip to the D — you won’t believe it until you see it!

Once just a lovely place to visit in the summer, Traverse City has become a sort of Mecca, beckoning to those who adore all things Michigan in every season. But even as the city grows, it retains its small town essence, all the while attracting the best entertainment.

Frankenmuth, settled in 1845 by 15 Germans from the Franken province of Bavaria, has retained its Bavarian roots and flourished. Best known as the home of Bronner’s CHRISTmas Wonderland, Frankenmuth has a year-round calendar of fun festivals featuring snow sculptures, beer, Bavaria, music, beer again, cars, Christmas and more!

Holland sets on the shore of Lake Michigan and is home to a real Dutch windmill, one of the nation’s top flower festivals — Tulip Time — and the Nelis’ Dutch Village, a replica of olden day life in the Netherlands. For those who thrive on the shore, there’s the massive beach at Holland State Park and a smaller version at Tunnel Park. You can walk, bob, dunk, swim, soak or build a sand castle, as you enjoy another blissful day at the beach.

Once sleepy little towns nesting side-by-side on the Lake Michigan coastline, the twin towns of Saugatuck and Douglas melded together and emerged as one of America’s top lake towns. With the beautiful (and always spotless) Oval Beach — named Conde Nast Traveler’s top 25 Beaches in the World! — your group will feel like they found their special spot. Be sure to check out their amazing art scene as well, if that’s something you’re into.

Michigan has so many places to enjoy the outdoors, it’s hard to pick just one… but among the best is the city of Marquette! Winter, summer, spring and fall, the greater Marquette area is bursting with plenty to do on and off the road.

Ann Arbor, home to the University of Michigan, is a favorite destination during football season, and as many have found, every other season too! For the artistically inclined, or the amateur foodie, Ann Arbor has tons of unique shops and restaurants to keep you busy all day.

Michiganders know there are no bad destinations in the mitten state so these are just representative of what you can find if you travel outside your box. If you need help planning your next group trip, let us help! 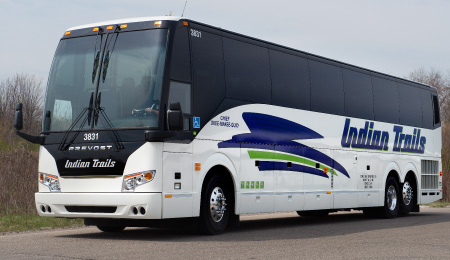 Complete Guide to Booking a Bus
Download the Guide